You can have Michelin starred French food in Tokyo. Not that I have, it’s just something to keep in mind when visiting a city with more French restaurants than you could ever possibly visit. One day, perhaps, when the blog bucks start rolling in. Or I win the Japanese lottery, which only happens twice a year and is affectionately called the “Summer Jumbo” or the “Winter Jumbo”. Jumbo!
Anywho, every once in a while we need a break from the old rice cooker and need some “ethnic food”. So, sacre bleu it was time to head to Shinjuku 1 Chome for some French Food. 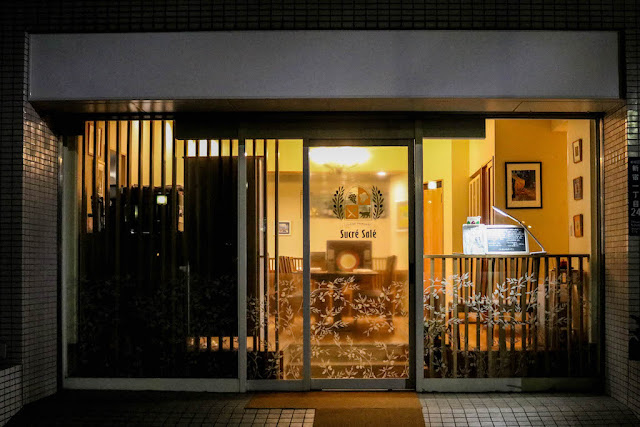 Which means Sugar Salt…or Sugar & Salt, I’m not sure. I’ll take both, though. This restaurant used to be located in Araki Cho (my favorite little booze den in all of Tokyo). The chef then packed up and went on a soul searching walk about. Or went to work for a posh Tokyo hotel. You choose. Anyway, he has opened up shop again in Shinjuku 1 Chome. Much to the delight of Takao who used to frequent his old place in Araki Cho.

The place is tiny, warm, cozy and run by a super charming husband and wife team. There is even counter seating in front of an open kitchen. The people sitting it the counter were chatting it up with the chef as he was cooking, which I thought was a nice touch and not something common to little French places in Tokyo. Paris, maybe? I have no idea but would love to find out. 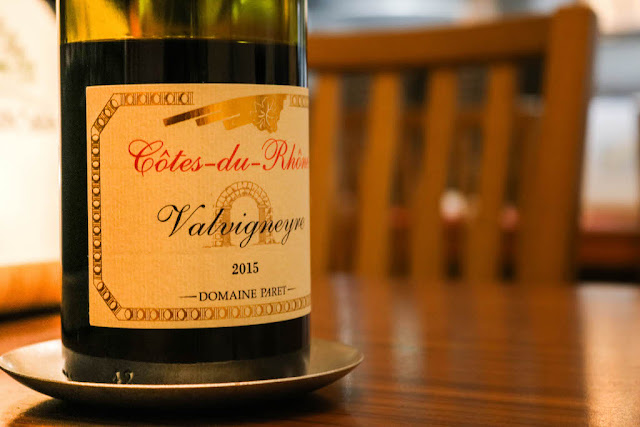 The wine menu wasn’t extensive but neither is my knowledge of wine. So I love it when I try the cheapest bottle on the menu and it brings a tear to my eye. I’m sure the other wines were good but typically once I’ve found my bottle at a particular restaurant it becomes one of the reasons I go to that restaurant. This damn blog has been great at helping me keep track of which wines I liked and where. Starters coming up!

Behold! A half raw salmon steak! The skin was crisped on the grill then dumped onto a puddle of cream and caviar and topped with some of the tastiest purple lettuce salads I’ve ever had. This was Takao’s and it was amazing but it couldn’t compete with my… 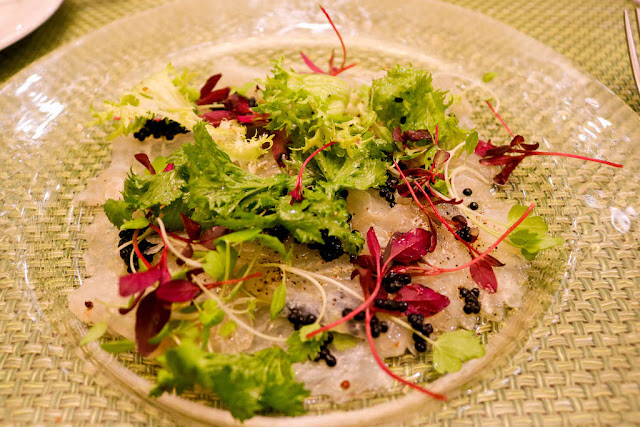 White fish carpaccio! While this dish is technically from Venice, Italy the Japanese are not new to the raw fish game. The raw anything game for that matter. Did you see my raw chicken dinner? I’ve had plenty of fish eggs in Japan but this may have been my first encounter with French caviar. It’s incredible! I get the impression it needs to be used sparingly though. Those little black spheres pack a mighty briny punch. This is definitely one of those dishes that I think would split your debit card in half in most countries. Here in Tokyo it clocks in at a modest 15 USD. Which I recognize is not the cheapest meal you can find but if you skip 3 trips to Starbucks it’s already paid for. 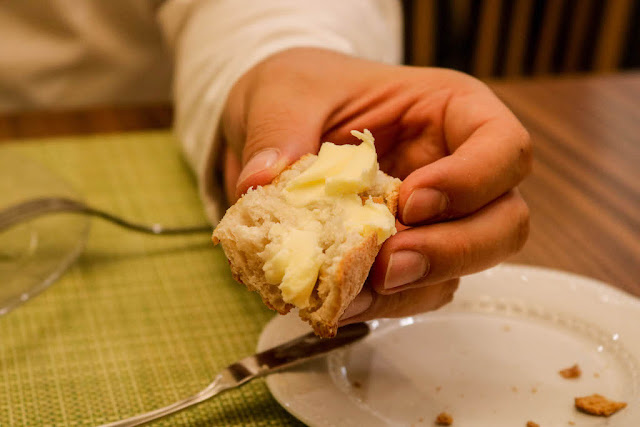 Baguette and butter break! The service here is awesome and paced really well. No easy task when it’s just 2 people running the place. So in between our starters and main dish we ordered baguette and a fancy french butter. 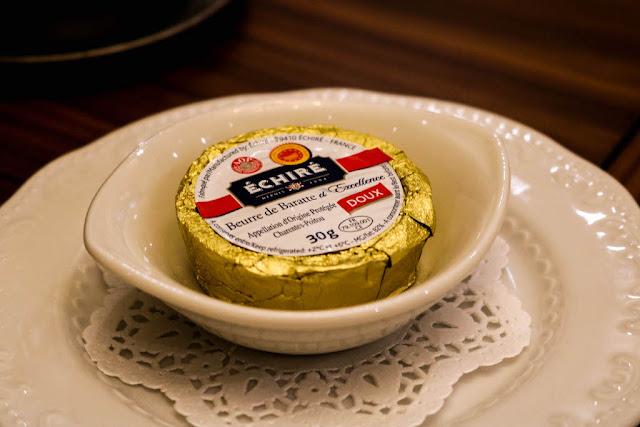 Bread and butter do not come standard at restaurants in Japan, at least not often. I’ve never seen it at least but that doesn’t mean it cant be found somewhere. This guy makes his own baguettes in a massive bread oven that’s just chilling in the open kitchen. Had to try it. The butter was about 2 USD. Which, I know, sounds insane. Paying for butter? The Olive Garden has it in those pre-sealed plastic pouches! Papa John’s adds salt and garlic and melts it for you! Well, let me tell you it was worth it! This butter was so decadent! Like Nachos made with Cheeto’s or veal with Hollandaise sauce. 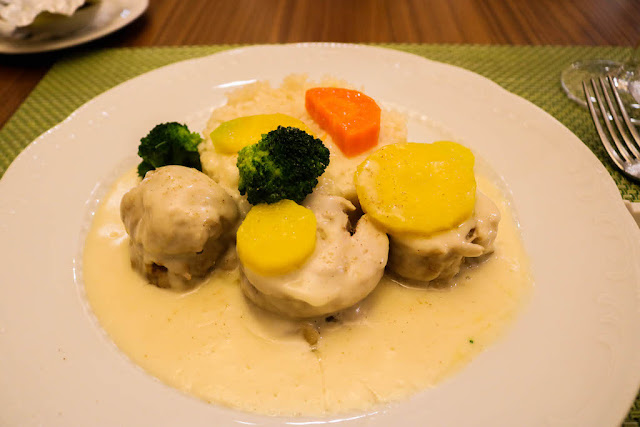 Next up, veal with Hollandaise sauce. Well, a bechamel sauce with extra butter. This was my main and looking at it now I understand why pants have been so form fitting lately. Three super tender caps of veal drowning in buttery white sauce…that makes it sound negative…veal subsumed in buttery white sauce. Served with buttered rice, carrot, yellow carrot and broccoli. It made me think of my plate at Thanksgiving dinner growing up on that butter farm. 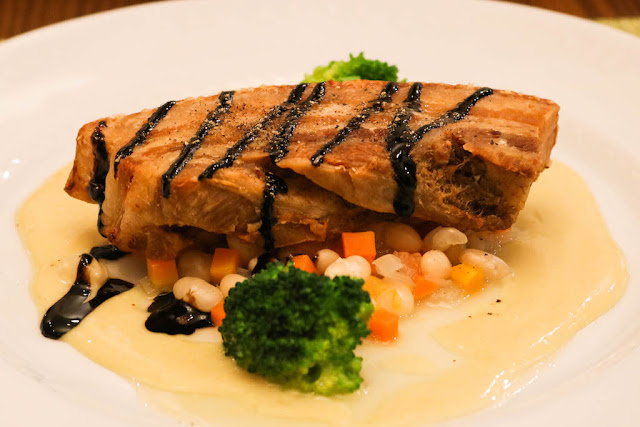 Takao had a pork chop. Well, it was more like a massive strip of bacon that was burnt so crispy on one side that it shattered when you bit into it to reveal the tender bacon inside. Served with more of that butter sauce, diced beans and carrots and broccoli. With a generous drizzle of balsamico. I cant choose which one was better. These were both super duper. 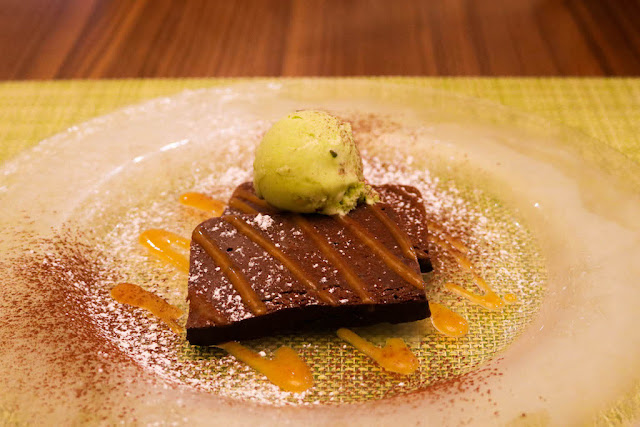 Dessert! Lest we forget we are in Japan the chocolate cake came with a dollop of green tea ice cream on top. Also, continuing with the butter theme we have some French caramel because nothing is ever good enough for the French. Not even chocolate cake. 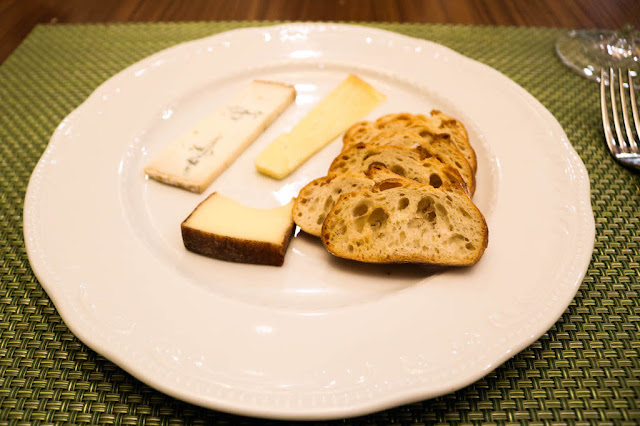 Since I am on a diet I had the cheese. Also, we had wine left to finish.
Bon appetit!
Nearby Stations: Shinkuku San Chome
Nearby Attractions:
Kabuki Cho
Golden Gai
Shinjuku San Chome (Nightlife area)
Shinjuku Ni Chome (Gay Nightlife Area)