Let’s talk about yakitori. It means grilled chicken. This being Japan however, grilled chicken means something quite different. Yakitori restaurants will serve every conceivable part of the chicken in a variety of ways.  You don’t usually see things like beak or chickens feet on the menu but give me some time, it’s probably served somewhere.  At Doromamire however, they have taken european dining habits (eating outside, massive wine list, salt) and blended it perfectly with yakitori.  They even have a few Chinese inspired dishes on the menu.  The one thing tying it all together is chicken. 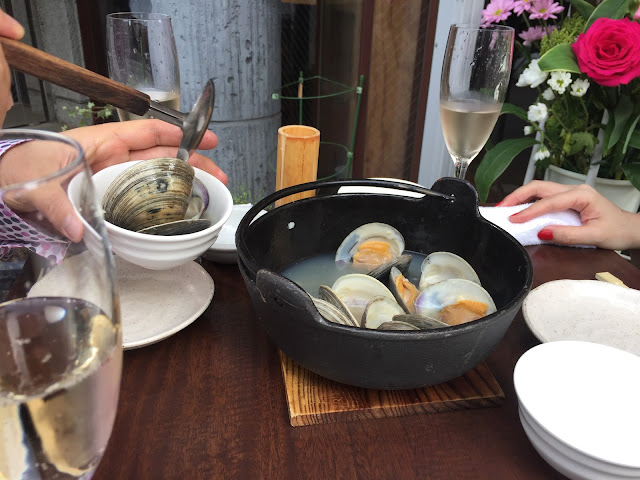 When we visited Doromamire last, it was their 4 year anniversary.  Some of their repeat patrons were invited for a special early hours dinner.  As a gift we were given this bowl of mussels in a chicken broth that was super duper!  Yakitori places will typically have incredible chicken broth bubbling a way in a vat full of chicken bones.  Drink it up because it will congeal, it’s basically just chicken bone, salt and fat…just like grandma used to make.

For starters we got the chicken liver mousse.  It comes with toasted baguette and a chopped olive spread.  This stuff is incredible.  I enjoy chicken mousse out of a can so eating this was…decadent.  I could scoop this into an ice cream cone.  Of course you’ll see liver skewered and grilled on the menu but this is a great way to build up to the main round of skewers.  One of the best things about eating this in a Yakitori place is that you know it’s fresh.  A lot of restaurants in Tokyo are small, which means they don’t have massive freezer space.  So occasionally items on the menu will run out.  Do not be that tourist that gets pissed off about this.  It’s a good thing.  These space limitations require the restaurant to purchase selectively.  It also requires them to buy things in amounts they think they can sell out of in a day without having to store them.  What does that mean for you?  It means what you’re eating is fresh.  So if you see the liver mousse on the menu you can rest assured it’s not from a can.

This basket of veggies is always available however the veggies may change.  I give you the Yasai Moriawase (vegetable selection platter).  Some of the veggies you’ll be familair with, some you may not.  This time around we had a series of tomatoes, peppers, tiny cherry tomatoes on the vine (eating them makes you feel like Ancient Egyptian royalty) as well as a variety of radishes,  turnips, black carrots and some long thin green thing that I am still not clear on.  It’s served on a bed of lettuce with rock salt and miso for dipping.  Eating that radish with just a small dip of salt is one of my favorite foods at this restaurant.  There are some foods in Japan where its not the cooking skill that matters but the discernment of the chef.  If the radish is perfect and the salt of a high enough quality…no cooking need be done.  Just eat it.
Except for the lettuce.  Don’t eat the lettuce.  Save it and then ask the server to make it into a salad.  They bring it back in a carrot dressing that’ll bring you home to Jesus.  I ate it so fast I forgot the photo.  Bad blogger! 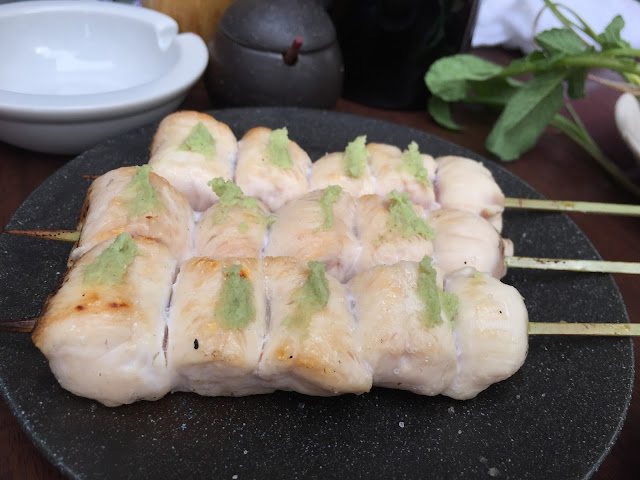 Time for some chicken!  This is a chicken sasami, or chicken tenderloin.  Cut into bite sized morseles, then grilled.  You can choose them as “shio” or “tare”.  Shio is lightly salted while tare means it was dipped in teriyaki then grilled.  Sasami wasabi (which usually does not come with tare) is maybe my absolute favorite thing to eat at Doromamire.  It’s so simple.  Grilled perfectly and with a dollop of wasabi on each bite.  You order them by the stick.  These guys are real tender on the inside so don’t be surprised if they are a bit pink when you bite into them.  They didn’t undercook it, that’s how you eat it. 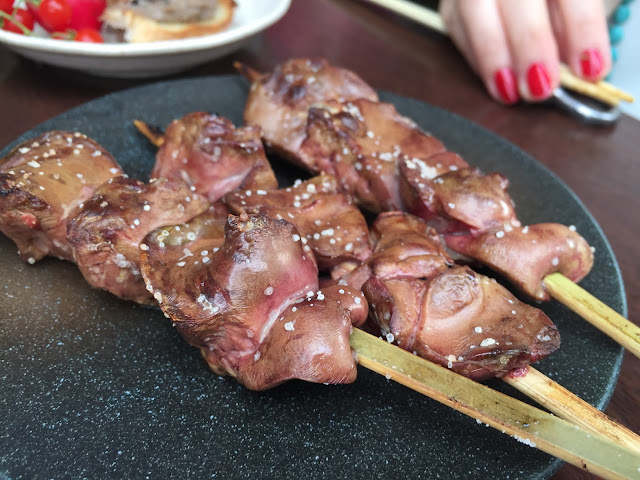 The liver is back.  Liver was never something I enjoyed before coming to Japan.  Then it was about 6 or 7 years before I developed a taste for it.  Here it is served with just a touch of salt.  On your table you will notice a small ceramic cup with a lid and a tiny wooden spoon in it. Thats shichimi.  It’s a blend of peppery spices.  Put a dab of it on your plate if you want to add a bit of spice to the liver.  (it’s not typically added to the wasabi sasami though…you wouldn’t want to look like a noob) 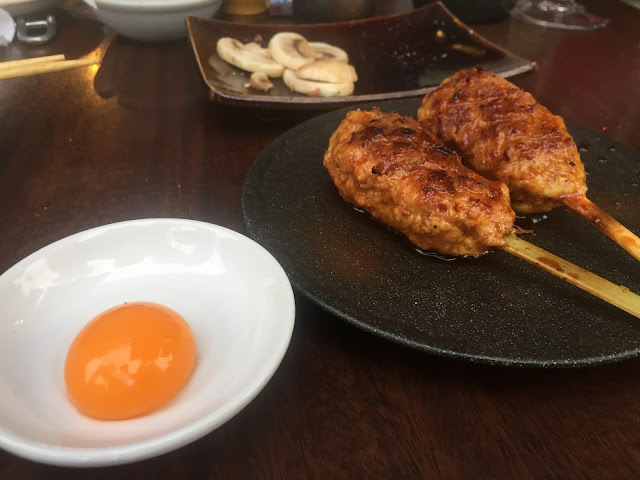 On second thought, this is my favorite dish at Doromamire.  This is Tsukune.  It’s a chicken meatball served on a skewer, dipped in teriyaki and grilled.   You dip it into the raw egg yolk for some super high level taste sensations.  You can skip the egg yolk if its not you’re thing but just know that everyone I have taken to Doromamire has been surprised by the egg yolk.  It’s super duper.  When you eat the tsukune you will notice there are some really nice crunchy bits to give it texture.  Those crunchy bits are cartilage.  Trust me on this one.  It’s amazing! 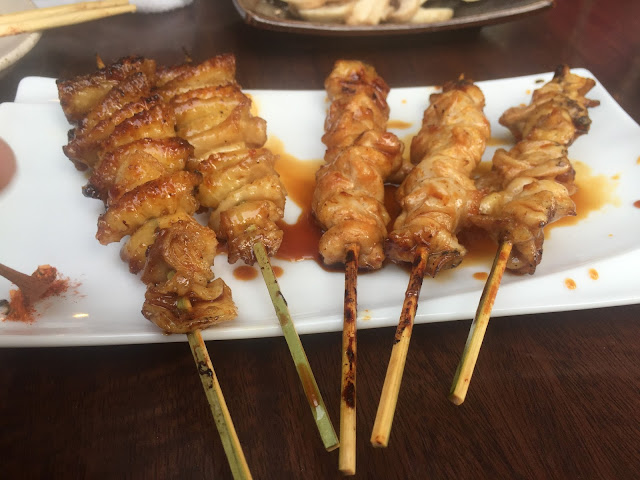 Salt lovers dessert.  This is kawa. It means skin.  That’s right, it’s just a stick of grilled chicken skin.  Pretty decadent.  If you’re one of those people that just eats the skin off KFC then this dish is for you.  Burnt in all the right places, tender in the rest.  Served in a sweet and savory teriyaki sauce with some shichimi chili pepper to dip it in.  Save this dish for last.  It’s a winner.

That was about everything we ordered this round.  This place is about 5 minutes walk from our apartment and it’s one of the first restaurants Takao took me to when I first moved to Tokyo.  We’ve taken or made reservations for nearly all of our AirBnb guests and they’ve all loved it.  I strongly recommend this place.  It’s located in the Araki neighborhood in Shinjuku, which was once an entertainment district run by Geisha.  Now it’s a crap ton of bars and restaurants and it’s a blast to walk around at night.  So after dinner start walking and go for some drinks, you wont be disappointed. 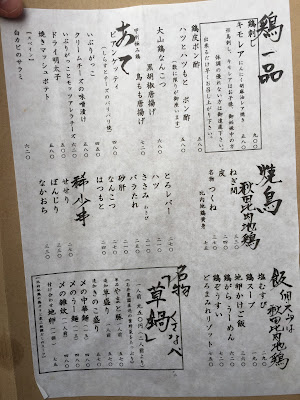 This menu is not going to help you very much if you don’t understand Japanese.  They do have an English menu but it’s not as extensive as it does not include specials and seasonal items (they cant be rewriting an english menu every time they buy some new vegetable).  If you’re interested in this place but plan to order more food just drop a comment and I’ll suggest some more items for you. 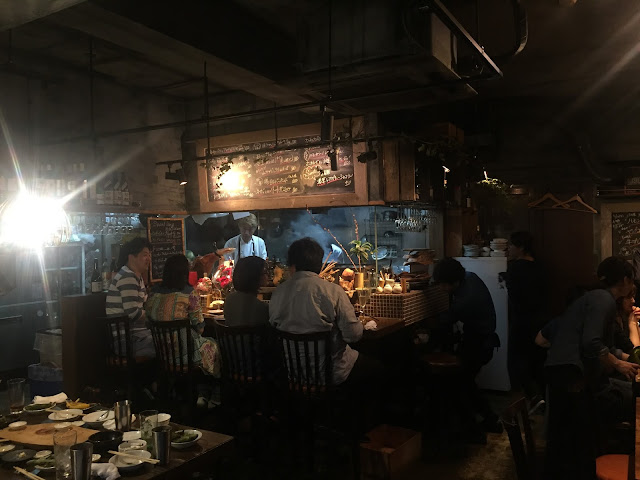 Some notes: for a successful doromamire dinner: 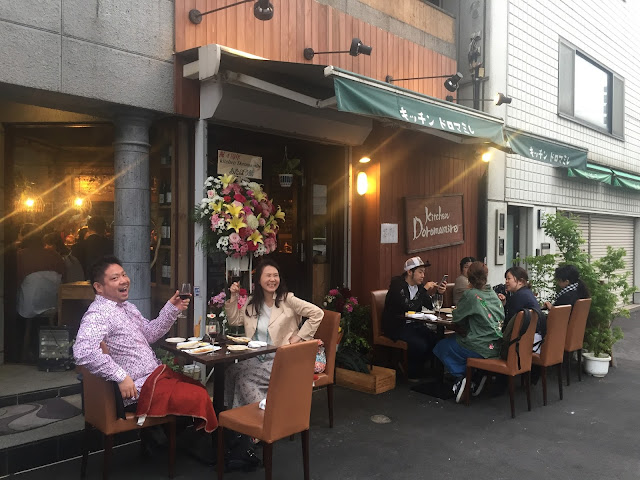 Zosui for the soul