It’s time for some next level egg fried rice. Omurice is a uniquely Japanese dish with some ingredients that surprised me the first time I had it. Omurice is the adorable combination of the words Omelette and rice. These cute words combos come up pretty often in the Japanese language, such as Pokemon (Pocket Monster) or sekuhara (sexual harassment).

Welcome to Kitchen Taka, in the Araki Neighborhood. A quiet, no frills counter eatery. Like zero frills, this place is a counter, a fridge, a burner and an industrial sized rice cooker that could probably cook a pig. 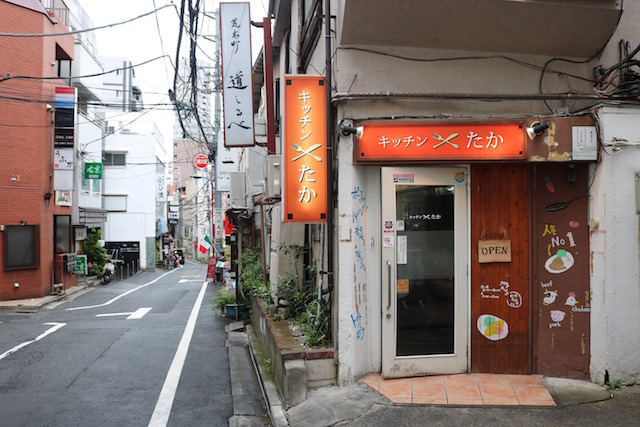 What first surprised me about omelette rice is the ingredients. The cooking method is definitely more in line with what diners in the west might expect to find at an Asian restaurant. Flaming hot oil fires, rice being ricocheted around a wok, a dude with arms scarred by open flames, salt. However, what winds up on your plate is a flawless omelette wrapped around rice that was pan fried in ketchup and butter with bits of sliced ham and portobello mushrooms.  There is nothing in this dish that you wouldn’t be able to find at any diner in America. Hence the surprise.
I ordered the Omurice in White Sauce. The White Sauce is a cheese and pepper sauce. It was warm, filling and probably had all the calories you need for the next few days. 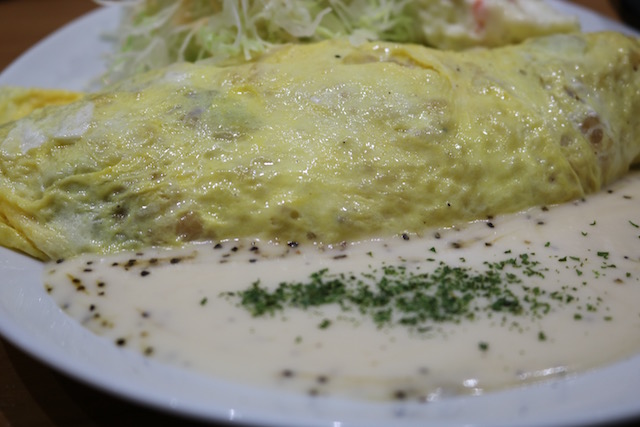 Two eggs worth of omelette perfectly wrapped around a pile of buttery, ham and mushroom fried rice.

There are tons of other sauce options as well! Traditional is ketchup, that’s how mom might make it at home. It’s a Japanese ketchup that I find to be less sweet than American ketchup. Other options include, demi-glace (yum), curry (yummier) black pepper sauce (hell yes) and some places even serve it with red wine and butter sauce (Jesus, take the wheel!) Aside from sauce options I’ve seen this dish with clams, oysters, chicken and slow cooked beef cheek….nnnnnggghh.

Takao ordered a salisbury steak. Which in Japan is called a hamburg steak. Basically a no carb burger. We don’t want none unless it (doesn’t) got buns hun! 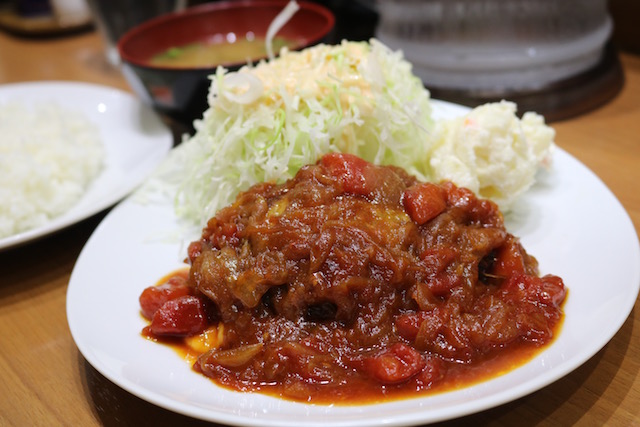 Under all that tomato and onion sauce is a piping hot, football shaped hamburger. This was so good! Again though, no ingredients that couldn’t be found at a roadside diner in the states. They’ve just adapted them to go really, really well with fragrant, nutty, Japanese white rice.
As this is Japan though, this dish comes served with miso soup, a julienned cabbage and potato salad. Pretty damn juicy. I should have filmed this part…