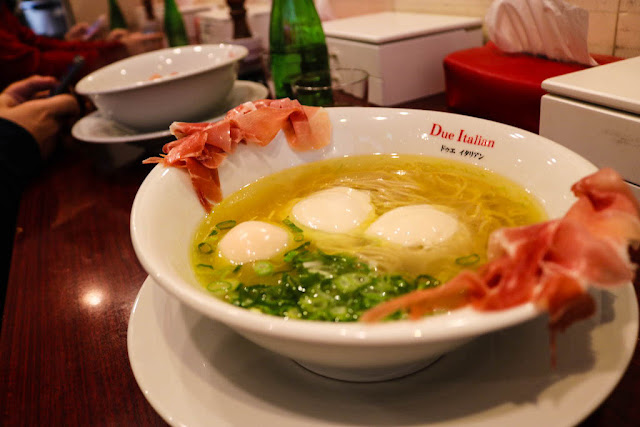 I am not too big on fusion usually. I went to University in the Pacific Northwest.  Fusion to me usually just meant some hipster put bulgogi into a burrito and then parked his van outside of some University. Anything is good in a tortilla. This Italian Ramen place in Kudanshita however is a little more thought out than just putting random things into tortillas yet so damned simple I’m surprised it’s not more common in Tokyo. 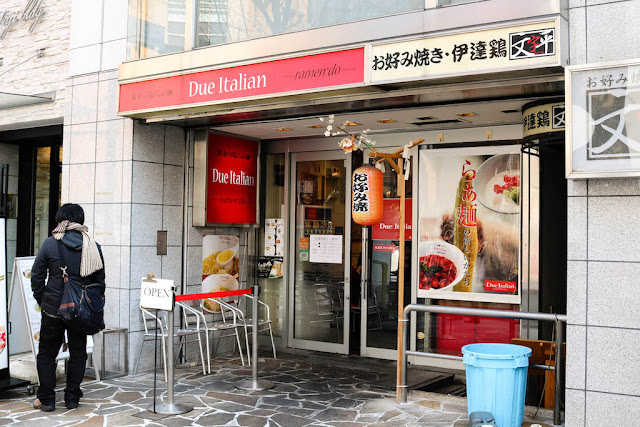 Stop reading if you don’t like Italian ham or cheese

Long, long ago in a city that wasn’t Tokyo I had an Italian roommate from Rome. We lived on the outskirts of Osaka drinking very cheap vodka while he smoked cigarettes over stovetop because we had no other source for heat in the kitchen. It was all very soviet now that I think about it. This Roman came to stay with me in Tokyo recently and he hates Tokyo, along with most other things. When he came home one day and told me about this Italian Ramen place where he ate not one but two bowls of Ramen I know it must be special. As today is Takao’s birthday I decided to look up a few new restaurnats and take him on a little food tour. First stop, Due Italian.

Welcome to Due Italian

Just a short walk from Ichigaya Station is Due Italian. You’ll see a menu outside that has the words Fromage Ramen on it. Jump on inside and you’ll be greeted by a ticket vending machine with pictures of the different menu items on it. There isn’t any English written inside the shop but dont worry, pictures and a very nice lady in a tuxedo will help you out. They have beer and sparkling wine as well. The inside looks like a ramen shop that gets cleaned every so often. It’s all counter seating and the only thing the staff does is bring you the ramen. 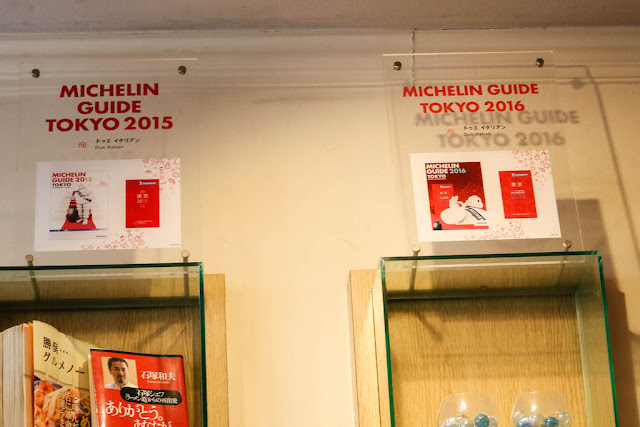 This place was in the 2015 and 2016 Michelin guide. They received a Bib Gourmand rating which means they serve exceptional food at prices for normal humans. Everything on the menu was around 10 USD and under. 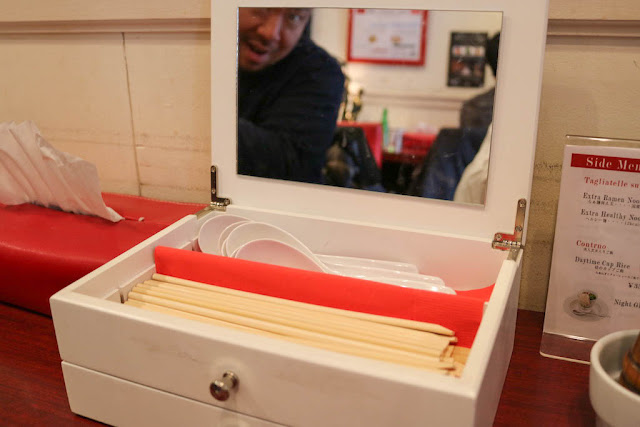 Everything you need to slurp down your ramen are in these little jewelry boxes on the table. The bottom drawer is filled with disposable bibs for people like me who tend to spill food all over themselves. 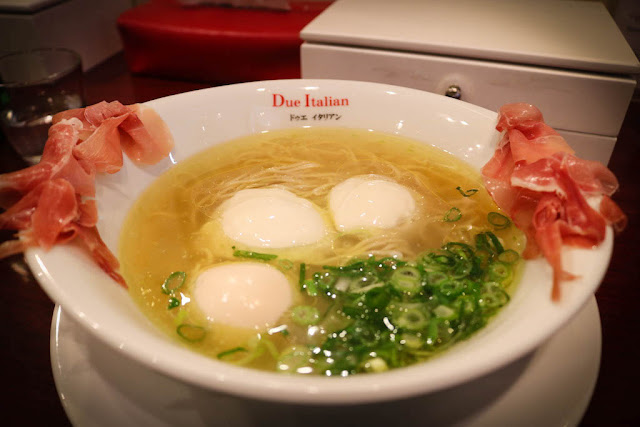 I didn’t know what Burrata was until I took my first trip to Italy 2 years ago and realized I know nothing about cheese. It’s basically mozzarella stuffed with creamier, better mozzarella. It’s incredible! At Due Italian they have thrown it into ramen and then added a slow cooked egg and prosciutto just in case you haven’t already lost your shit. The burrata will be in its solid state only for about 5 minutes. After that it all melts into the ramen broth. Takao and I are not 100% certain but we think the broth was a chicken mussel broth combo. It went perfectly with the burrata. Ramen usually comes with pork in some form or another. So adding prosciutto added this perfect saltiness and depth of HAM to the ramen. 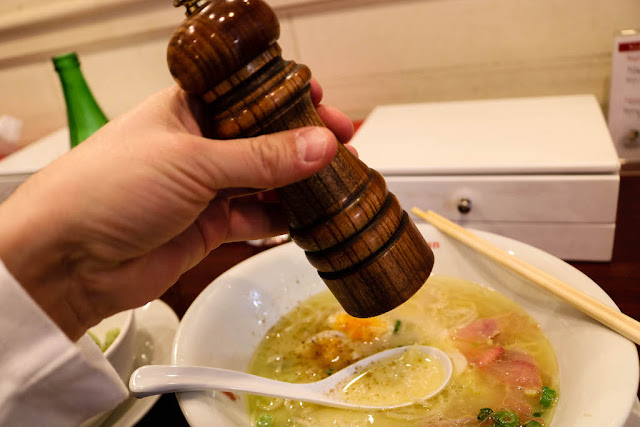 You’ll find a pepper mill on your counter and I highly recommend using it. 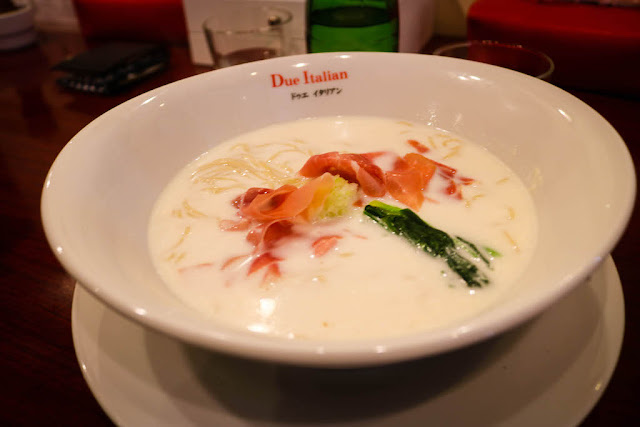 Takao had the white ramen. Slightly healthier due to the presence of a single stock of komatsuna, which is spinach’s Japanese cousin. His ramen we believe was the same broth but with mozzarella and cream already combined. It was delicious and felt like alfredo sauce in ramen form. 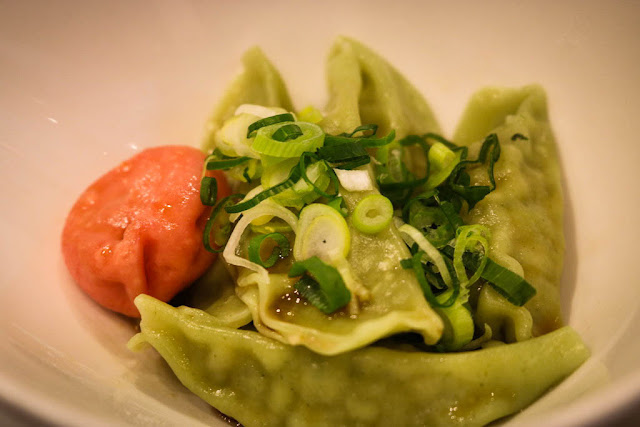 As this is a ramen restaurant they HAVE to serve gyoza. This place kept the fusion theme going with basil garlic gyoza. The filling was your basic garlic and pork combo with basil gyoza wrappers. Topped with green onions and soy sauce these were a nice little treat with the ramen. 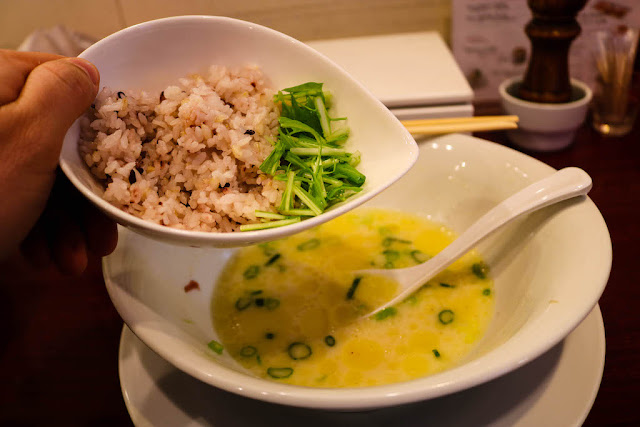 The gyoza were great but the side dish champion would have to go to the risotto. If you add about 1.50 USD to your Fromage Ramen you’ll be given a bowl of a mix of white/grain rice and some greens that you can dump into your soup once you’ve finished all your noodles. Grab that pepper mill and dive in. This was delicious! 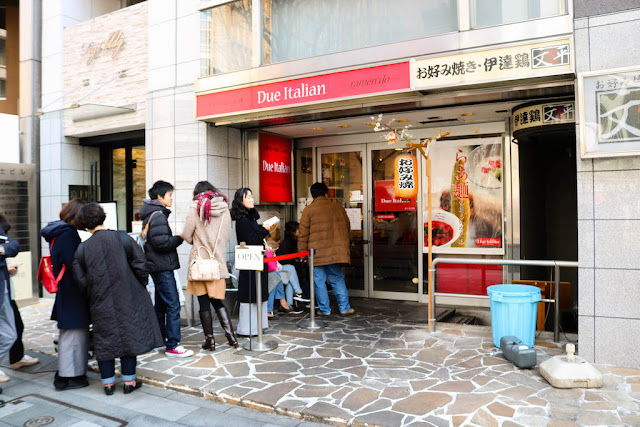 There you have it! Italian Ramen for the win. We arrived at about 12:45 and were pretty lucky to get seated right away. As soon as we sat down there was a line out the front. I’ve done another write up about a thai ramen place that was excellent. You can read about it here. Thai Ramen isn’t quite as much of an imaginative leap as this was in my opinion. I went into this a bit skeptical but I really enjoyed it. This is a great spot for lunch as you’re within walking distance of a park, a river and a massive shrine.
Enjoy!