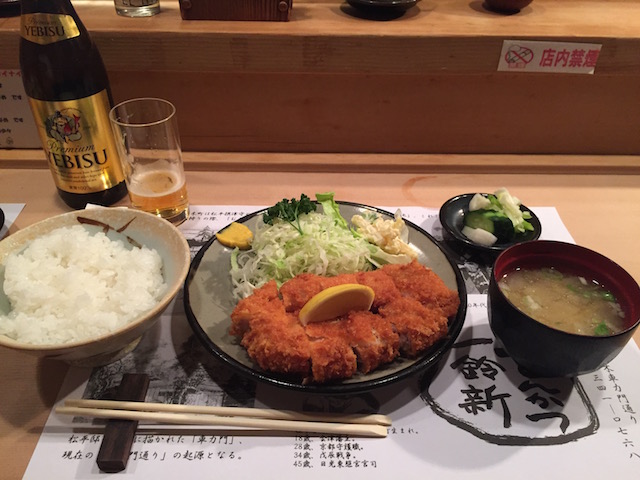 The Best Tonkatsu in Tokyo

The best Tonkatsu in Tokyo is out there somewhere. There are 1000’s of Tonkatsu places in Japan and until I’ve been to all of them Suzushin gets the top spot. Suzushin is a Tonkatsu senmon ten. Which means deep fried pork cutlet specialty shop. Not to be confused with a Tonkotsu senmon ten.  Which means pork broth ramen. More on that soon. Tonkatsu, not tonkotsu….
So basically everything starts with a deep fried pork cutlet or filet and goes from there. If you’re a human with taste buds and no dietary restrictions you’re probably already on board. . .but I’m going to explain anyway.

Here is Suzushin, in the Araki Cho Neighborhood. My favorite wining and dining area in Shinjuku. I say shinjuku because I cant pick one wine and dine area in Tokyo so I choose by Ward. Shinjuku is not the largest of the 23 Wards but it seems like the busiest. It also has all my favorite places.

Suzushin is run by this man. Who is retiring soon and leaving the running of the business to his son. Think Jiro Dreams of Sushi, but with pork! When we last went to Suzushin the mom told us he still works most lunch times but the son is slowly taking over dinner time. This style of pork is gaining huge traction in Taiwan and so this guy also takes on apprenticeships from Taiwanese chefs. They’ve also opened up one other location, in Taipei. 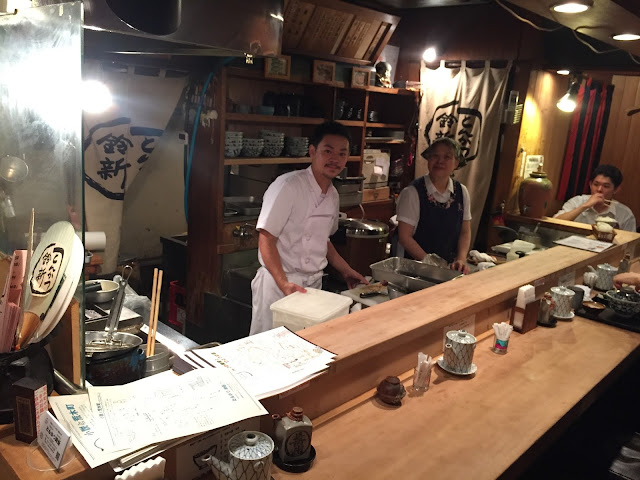 2 of the sweetest people you’ll ever meet. They only serve domestically raised pork from certain parts of Japan. If you’ve ever eaten and enjoyed Wagyu (Japanese beef) you’re going to love the pork here. This is a tiny little place with patrons usually just getting off work and having a beer and some deep fried fair before heading home or out to the other bars in Araki Cho. So join the crowd!
All right. We ordered the Cutlet and a Filet, they come served a bit differently. We also ordered beer. They serve it in large bottles here and bring you 2 ice cold tiny glasses. I like drinking it this way. Drinking a bunch of tiny glasses makes you feel like you’re getting something extra. Or that you have giant hands. They serve Ebisu Beer which I don’t see as often outside of Japan. It’s my favorite domestic Japanese beer and is worth of the best Tonkatsu in Tokyo. That little nibble of tofu in the small bowl is a little palette cleanser that comes with the meal. It changes depending on the day. Usually something light to prepare you for the deep fried pork explosion that is on its way.

Before the pork shows up let’s go over our condiments. That dark ceramic teapot is full of Tonkatso Sauce. It’s a sweet, tangy barbecue sauce that will go really well on any dish served here. No one will fault you for it but if you want to eat “properly” pour it directly onto your main dish, not onto your rice. Next up we have toothpicks. Then napkins. Then BAM, soy sauce in the little grey pot. I never use the soy sauce when I’m here and usually just stick to the Tonkatsu Sauce. And that little guy on the left is shichimi. Usually if you see a little ceramic jar with a little stick coming out of it, shichimi is inside. Shichimi is a blend of seven seasoning. Shichi meaning 7 and mi meaning flavor. It’s got a nice peppery, slightly spicy kick to it that goes really well on the tonkatsu. They also serve a tonkatsu and egg donburi (rice bowl) and shichimi goes very well with that one.

OK, we are ready to eat now. 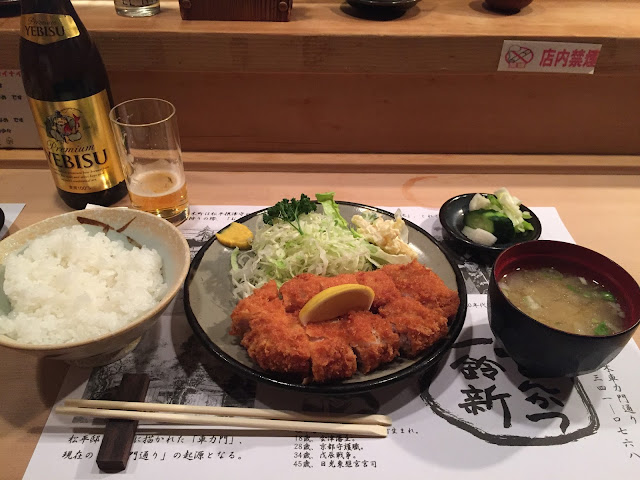 White rice, tonkatsu cutlet, tonjiru (pork soup) and some pickles. And a cartoonishly perfect lemon on top. You’ll see what I mean when you squeeze it.

The soup on right is Tonjiru. One of my favorite soups in Japan. It’s made with miso like any miso soup but instead of Dashi (fish stock) and seaweeds and tofus it’s made with pork bone broth and hearty vegetables like carrots and burdock. It’s incredible. 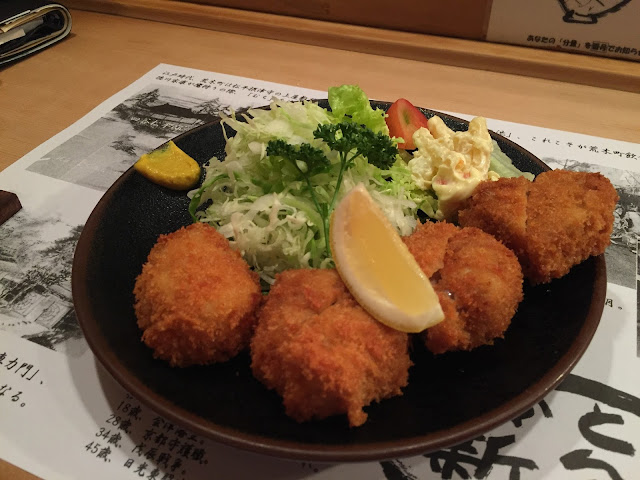 Takao ordered the filet. It comes served in smaller pre cut pieces but don’t worry, you’re getting the same amount of pork. You’re just getting better deep fried bater coverage! What an age we live in! It’s a different cut of meat so if you are going as a couple, get both the filet and the cutlet. 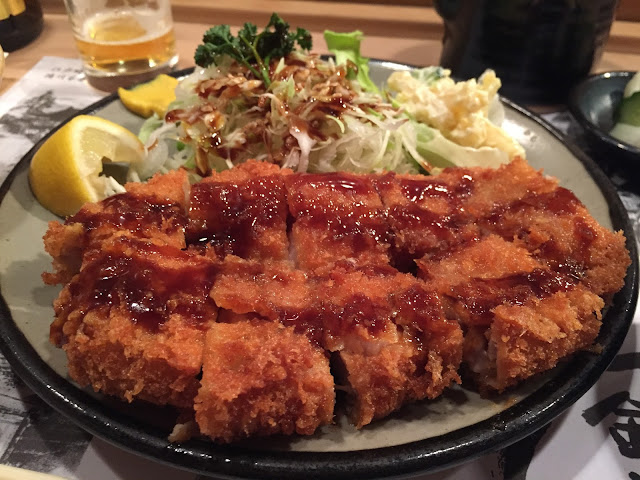 All right! Sauce that cutlet up, squeeze some lemon on it and you are ready to go!
“But Richard, I’m not so big on pork, what else they got?”
Way ahead of you, let’s bring the menu back. 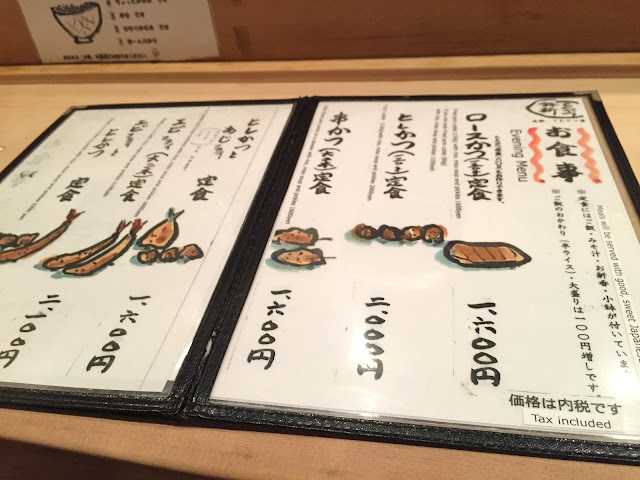 Over there on the left side of the menu we have the SAME set as shown above except with prawn or fresh caught white fish. Fish may vary but it will always be a white meat fish. Delicious, but I never can say no to the pork cutlet. As you can see, the menu is not large. It’s basically 6 different sets with the main dish being either, pork, prawn or whitefish. All battered and deep fried to perfection. The menu is translated into adorable english so your bases are covered.  “All dishes served with good, sweet Japansese rice.” Wonderful. Each set with beer comes in at around 16 USD. A bargain for the amount of and quality of pork you’ll be getting. 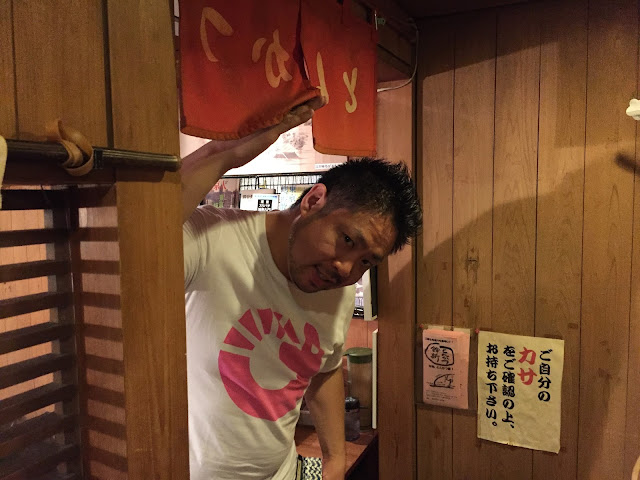 The Best Tonkatsu in Tokyo

Where to eat in Omoide Yokocho – Torobako Izakaya

Okome – How to Prepare Rice the Japanese Way