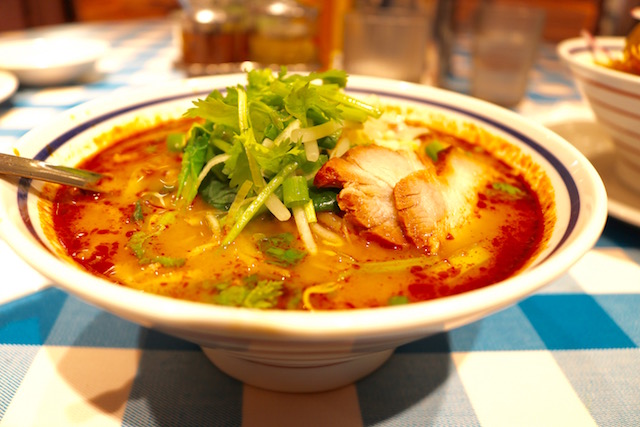 At some point during your visit to Tokyo, like it or not, you will find yourself at Shinjuku station. Shinjuku is the world’s busiest station. It serves around 3.5 million people, daily. SO, if everyday the entire population of Berlin got up and walked through a train station, that’s Shinjuku. It’s crowded.

Talked away in the basement of the Lumine 1 shopping center inside Shinjuku station is a little Thai restaurant that specializes in noodles. 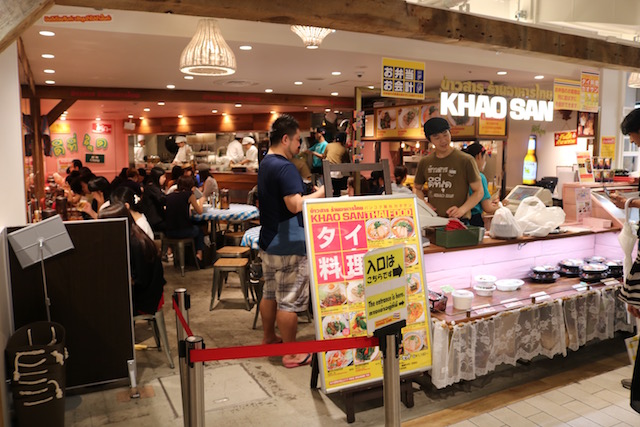 Welcome to Khao San. Named after the busy backpacker neighborhood in Bangkok. The area Leo stayed in at the beginning of The Beach.
First up, let’s talk about why it’s not a waste of time to try Thai Food while in Tokyo. Do you like American Chinese food? Of course you do, it’s delicious. Non American friends of mine who have visited the US often comment on how surprised they are by the different varieties of Chinese food available in the states. Take Beef Broccoli for example. The broccoli used in this dish is not native to China, the dish has early origins in California. In fact, broccoli, carrots and onions in Chinese American cuisine are substitutes for different radishes and onions that were used in the dish in Guangdong, where much American Chinese cuisine has it’s roots. Point being, when people find themselves in a foreign land and missing their hometown cuisine, they improvise. Often to the benefit of everyone around them. The British national dish is a Chicken Tikka Masala. Not an eel pie, as delicious as that sounds. In order to appeal to the gravy loving Brits, many Indian dishes were adapted to suit local tastes.
Thai people who have set up shop in Tokyo have done the same. A lot of the Thai Dishes you might find in America, you may not find here and vice versa. And what do the Japanese like? Ramen…well who doesn’t? 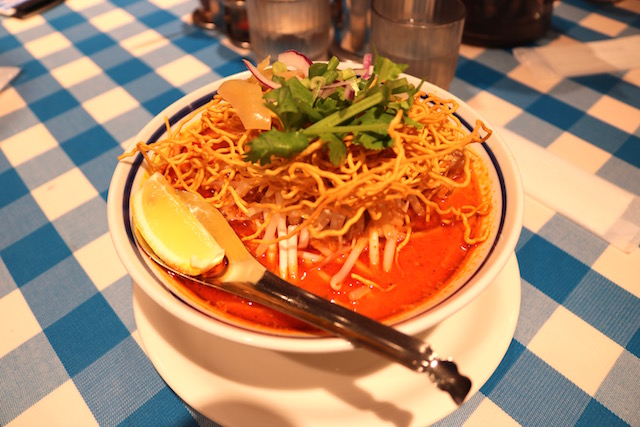 Khao San in Shinjuku station has a massive noodle soup menu. Thai Ramen. This is Takao’s Masaman Curry Ramen. It’s a coconut base curry soup that was delicious. 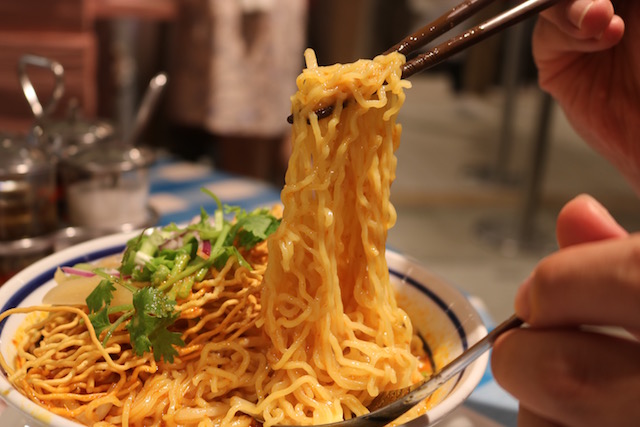 The most striking similarity to a ramen place is that you have some say in what kind of noodles you order. You can choose from egg, rice and vermicelli. You can also then choose thick or thin noodles. Takao had the egg noodles.
I had the Tom Yum Pork Noodle Soup. Extremely good if you like Tom Yum Shrimp, a common dish found at Thai restaurants in the states. This was really good, not as good as the curry though. 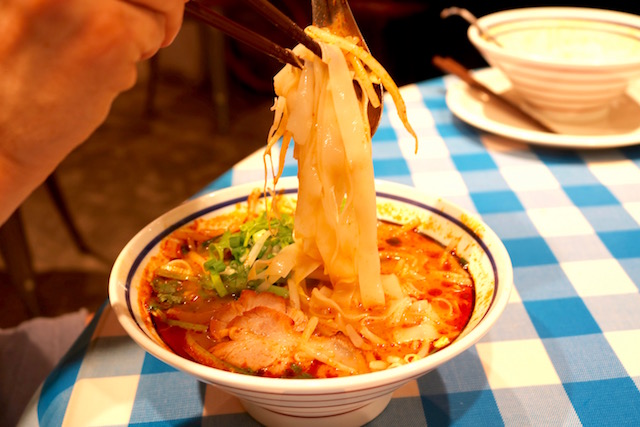 I ordered the thick noodles because I like a challenge. They have paper bibs on the table, which I should have worn. 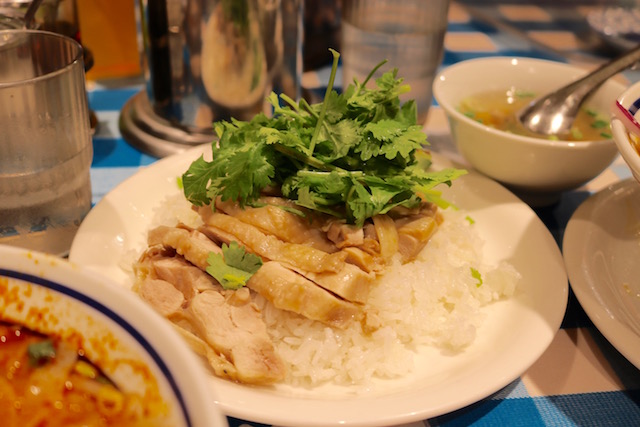 We then went overboard and ordered Kao Man Gai. Steamed chicken on jasmine rice with a sweet and savory sauce and tons of cilantro (we ordered extra cilantro). This is a delicious, simple dish. all of this was almost too much for 2 full figured guys so maybe just get a soup. Or better yet, get the rice dish and then curry noodle soup and when you finish your noodles dump some jasmine rice into the remaining soup! 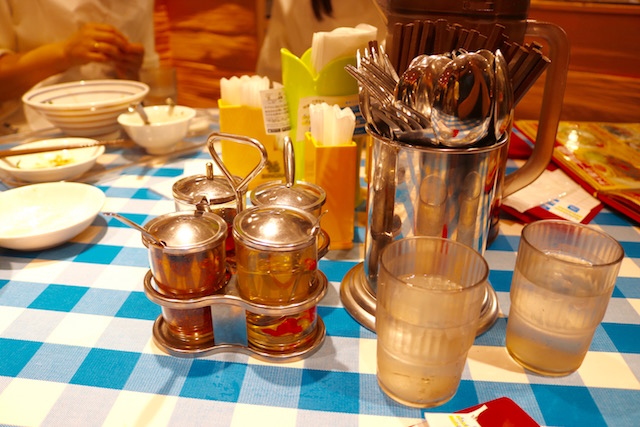 If you’ve ever been to Thailand you’ll recognize the table set up. Right down to the plastic, checkered table cloth and makeshift chairs. For condiements we have the usual, dried chilis, sugar, fish sauce and chili infused vinegar. Forgive me for not knowing the rules for these things but it always looks to me like people in Thailand used them pretty freely to get whatever dish they’re eating to suit their needs. 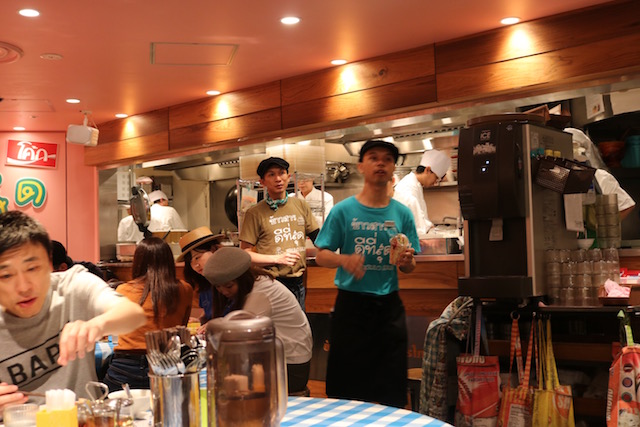 Staffed entirely by English and Japanese speaking Thai people, I highly recommend this as a yummy little lunch for noodle and/or Thai food lovers. They have a massive menu and some pretty impressive set lunches. Noodles and mini Ga Pao rice bowls, cant go wrong. All for around 10 USD.
Located in the Lumine 1 food halls, after lunch just wander around the food halls and you’ll see all kinds of fun cakes and desserts. There is even a pie restaurant.
Enjoy! 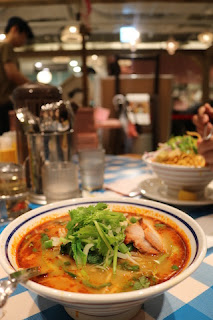 Where to eat in Omoide Yokocho – Torobako Izakaya

The Best Sushi to Eat in Autumn – Atabozushi

Tea Time at the Peak Lounge Tokyo – Tea With a View